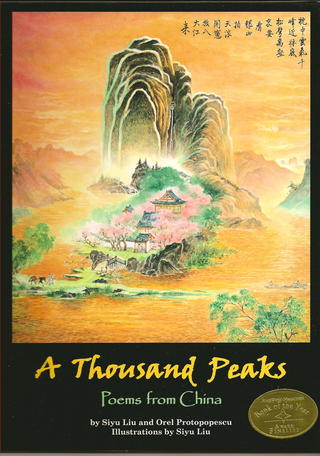 A Thousand Peaks, Poems from China

Some Reviews of AThousand Peaks:

A Thousand Peaks: Poems from China by Siyu Liu and Orel Protopopescu, illus. by Siyu Liu, is not your average poetry collection. Within the three sections organized under headings such as "Social Structure" each poem amplifies the theme, and informative text below often includes a brief bio of the poet. For instance, in the first section, "Pity the Farmer," describing the peasant work ethic, is paired with "Passing Huaqing Palace," the emperor's home from which "a concubine smiles" both written during the Tang dynasty. In the center of the spread, the literal translation appears below traditional Chinese characters. Resource listings and a guide to Chinese language pronunciation are included. A delicate watercolor scene opens each section.

Grade 5 & Up--An authentic introduction to Chinese poetry and culture. Each of the 35 poems, selected from two millennia of Chinese literature and translated into graceful English verse, is placed on its own page in a handsome, open design. Several prose paragraphs offer cultural context for each selection, while a sidebar displays the poem in its original characters, adding their pinyin transliterations and a literal English translation. Small black-and-white drawings that highlight a relevant character complete the page. Different English translators of compressed, allusive classical Chinese have interpreted these well-known poems in various ways. This unique collection invites readers to get into the act by comparing the Chinese original with this version, and perhaps exercising their own poetic skills in an attempt to understand another culture. Introductions to the three thematic sections explain social structure, scholar-officials, and love of nature. A concise, cogent introduction to Chinese poetry begins the collection and an author's afterword explains the translation process. The five full-page color paintings, literal renderings of Chinese-style art, are pleasant enough, though not as distinguished as Jean and Mou-sien Tseng's art for Minfong Ho's Maples in the Mist (Lothrop, 1996). Ho translated a couple of the same poems, but her collection, limited to famous poems from the Tang Dynasty, was aimed at younger children. This new volume spans the years between the third century Han Dynasty and the Communist era, and features many female poets. It's about as close to Chinese literature as young English-speaking readers can get.
--Margaret A. Chang, Massachusetts College of Liberal Arts, North Adams (School Library Journal)